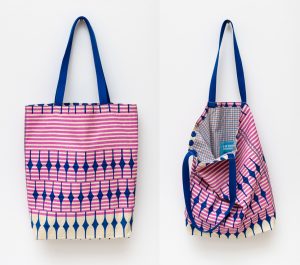 As Blue Skies Workroom, I was invited to participate in the Smithsonian’s special Spring online craft show, CraftOptimism, featuring artists using sustainable practices in studio work, April 22- May 1, 2021.  For CraftOptimism, I designed and made several new bags and pillows that I hope to continue to produce in 2021 – and with care and luck, offer at a few in-person events soon.  Miss you.

Quirk Gallery Pop Up Sat. May 4

Saturday May 4 10am-5pm Quirk Gallery.  I’ll be there as Blue Skies Workroom, debuting comfy screenprinted linen throw pillows.  Will have some large totes and handbound books as well. 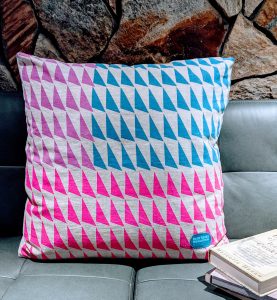 “Art of Making Money” in RichmondMagazine.com

Alyssa Salomon, artist-in-residence at the VCU School of Business, ends her tenure with a talk about material exploration 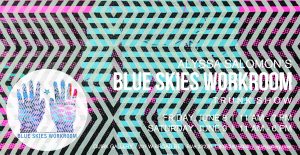 Blue Skies Workroom is my project of useful and joyful, handmade textile and paper goods for home, carrying, and giving.  Everything is printed with eco-friendly inks on fine fabrics; designed and made in my Studio Two Three and home studios.  I’ve introduced a few new patterns for summer including Flower Power on metallic silver linen and Ella on metallic foil knit jersey.  There are a fell color-filled books from Current Books still available plus new large journals with washable paper covers and thin notebook packs with risograph-printed covers.  Everything’s bright, colorful, full of summer and of happiness.
Quirk Gallery is located at 207 West Broad Street, Richmond VA  23220.  I’ll be there throughout the Trunk Show.  If you have a chance, come by, say hi, and check out Mary Holland’s cyanotype exhibit that’s on view too.
April 24, 2018

Blue Skies Workroom at The Brunch Market Saturday May 5

I’ll be vending as Blue Skies Workroom at The Brunch Market on Saturday, May 5, 11am until 4pm, at Lunch.Supper! in Scott’s Addition on Summit Avenue at West Marshall Street.  It’s an indoor market so we’re there rain or shine.  There’s food, of course.  I’ve been making some dazzling and vibrant new zippered bags.  I’ll also have aprons, tote bags, happiness. and a few hand-bound multi-color books remaining from Current Books. 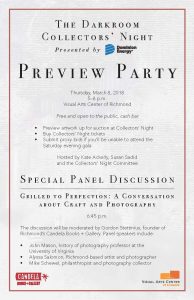 Blue Skies Workroom has been selected to be an exhibitor for the inaugural CURRENT Books book fair, March 31, 2018.  I’ll be debuting Relative Medium,  a project in which I use bookbinding as collecting and as color studies, producing hand-bound books for  use as journals, scrapbooks or decorative objects.  Relative Medium is inspired in part by Albers’ Interactions of Color (of course), Doris Lessings’ The Golden Notebook, Agnes Martin, Arlene Shechet’s palates, quilts, Alexander Gerard, and even Dieter Roth, not to mention my unabiding love of color and of paper.

CURRENT Books will showcase high-quality works by art book publishers, artists, writers, and artist collectives who produce print media including artists’ books, monographs, and zines. CURRENT Books will highlight regional makers from Maryland, Washington DC, Virginia, and North Carolina, and give them a platform to exhibit and sell their work. The event cultivates awareness of arts-related publishing by featuring the full spectrum of creative production found at the intersection of art and publishing. CURRENT will return to its original neighborhood in Scott’s Addition for the inaugural edition of CURRENT Books on March 31, 2018, in Studio Two Three’s special event space.

Interviewed for the new VCU School of Business podcast

Enjoyed being interviewed by Dr. Kenneth Kahn, Senior Associate Dean, VCU School of Business, in my capacity as Artist in Residence, for the BSchool’s podcast Creativity @Work.  Listen

here to Creativity @Work on Soundcloud

What Will You Remember? say Look Again at First Look at Panopticon Gallery, Boston

Photographer Alyssa C. Salomon discusses the role of creativity in business in an interview with VCU News 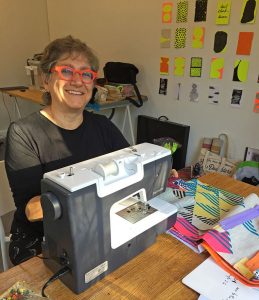 I’m spending two weeks working in the Artist House at St. Mary’s College, sponsored by the Department of Art & Art History.  I’m giving a talk with pizza on Tuesday 10/24.  What an extraordinarily beautiful place – land, water, sky and luminescence.   Thanks, Sue Johnson, for the great photo and so much more – looking forward to phase two in Spring 2019. 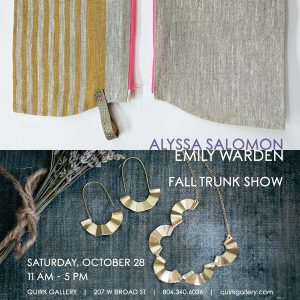 Aprons and zippered pouches hand sewn from hand screen printed linen, plus drawings.  Things I’ve made this fall in my S23 studio and at St. Mary’s College as artist in residence.  Come see what I’ve been up to & come say “hi”.

“It’s a photography show, except the photographer didn’t take the pictures.

“Serving as artist-in-residence at Virginia Commonwealth University Rice Rivers Center over the last year, Alyssa Salomon collaborated with Rice’s director of environmental outreach, biologist Anne Wright, to capture the diversity of the ecosystems of the Central Virginia section of the James River watershed.”  Read the rest of the review

The photographs of Jared Ragland and Alyssa Salomon, on view at Candela Books + Gallery through June 24, present more than meets the eye. Ragland uses for a jumping-off point Walker Percy’s 1962 debut, New Orleans-set novel “The Moviegoer,” and the films “Stagecoach” and “The Third Man.” Ragland appropriates stills from those movies, along with distinctive aspects of the Crescent City. Salomon edited stills from motion-activated video cameras, capturing urban wildlife in the James River Park System.

Candela’s Gordon Stettinius explains how both artists are “masterful printers who have elected to bounce from positive imagery to negative imagery in their respective projects,” creating vibrations between the two bodies of work. 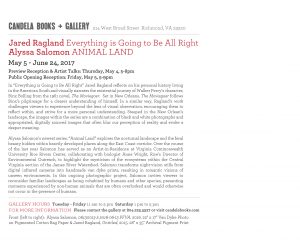 A Chicken in Every Plot on Google Arts & Culture

The Valentine Museum has been partnering with Google Cultural Institute which has put full exhibition content and images from our exhibition A Chicken in Every Plot on its Google Arts & Culture site.

Thanks Richmond Home, Marissa Hermanson & Sarah Walor for making us (me, studio, house, & chickens) look so good in this breezy but comprehensive feature in this month’s R-Home Magazine.

And thanks for the shout out for the upcoming ANIMAL LAND exhibition at Candela Gallery – opening in just a few weeks on Thursday, May 4.

Feel the love.  Spread the love.

Alyssa as Blue Skies Workroom will have affordable and adorable Valentines and small prints, as well as a few romantically colorful tea towels and napkins at Studio Two Three‘s Valentine’s Day extravaganza Love Potion No. 23, Saturday and Sunday, February 11th and 12th.  The weekend will be LOVEly with an irresistible array of artists’ artwork and live action photo portrait studio.  More info here!

ANIMAL LAND to be featured at Candela Gallery, opening May 4, 2017

Writer Marissa Hermanson Moomaw came in December, & today Sarah Walor, to see & talk about some of my favorite things in studio & home – there’s an article in the works for R-Home.  You know Chickahominy Lake was in the mix, as were Blue Skies Workroom napkins & towels.

ANIMAL LAND is part of InLight 2016

The video projection NIGHT LIFE will be part of 1708 Gallery’s one night exhibition InLight Richmond, November 11, 2016.

NIGHT LIFE is a part of the collaborative project ANIMAL LAND by Alyssa Salomon and Anne Wright, and has been created for InLight.  The deer shown in NIGHT LIFE were filmed within Richmond’s James River Park, less than four miles from Scott’s Addition where this year’s InLight extravaganza will be installed.  We may think of ourselves as urban creatures, but we all live in ANIMAL LAND.

For the next twelve months, Alyssa is Rice Rivers Center Artist in Residence, working with Director of Outreach Education Anne Wright, Science in the Park, and who knows what other aspects of Virginia Commonwealth University’s biological field station.  The residency has grown out of our work with the amazing and beautiful game camera images Anne’s collected in the James River Park.